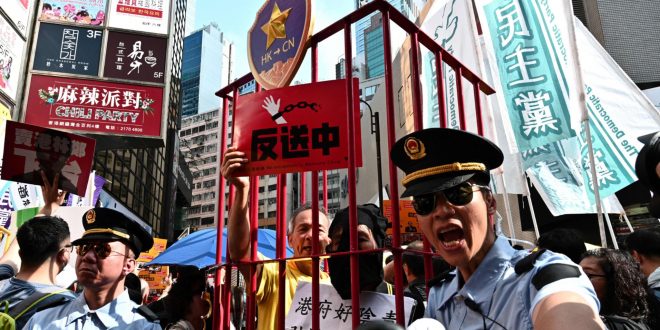 The foreign secretary has given his strongest hint yet he may suspend the UK’s extradition treaty with Hong Kong, as relations with China sour.

Dominic Raab confirmed a review into the arrangement has been completed and he will be announcing an “update” to parliament today.

He cautioned there wouldn’t be “business as usual” with the former British colony after the coronavirus pandemic ends.

Extradition treaties are signed between countries to speed up the deportation of suspected criminals.

But after Beijing imposed a controversial new security law in Hong Kong, senior Tory MPs have called for it to be rescinded.

“We are all going to have to ask ourselves if we recognise the Chinese Communist Party’s definitions of secession, subversion, terrorism and collusion, and share the interpretation of mainland judges,” the members of parliament’s Chinese Research Group wrote in a letter on Saturday.

Canada and Australia have already taken the step and others such as the US and New Zealand are considering doing the same.

Mr Raab did not rule out the UK taking similar action when he spoke to Sky News’ Sophy Ridge on Sunday.

“On Hong Kong, I’m going to go to the House of Commons tomorrow [Monday] to make a further statement on the work we’ve been doing with our partners in government,” he said.

“I’ve said that we’d review a whole range of other considerations.

“One of the things that we reviewed is our extradition arrangements and I will be updating the House on the conclusion of that review, along with other things that we’ve been looking at.”

But he added: “We have said there won’t be business as usual after COVID-19 and we are working with our international partners to get a proper independent review of what happened but we also want to make sure that we’re not slipping into some outdated dogmatic approach with China.”

It comes after relations with Beijing deteriorated with the news the UK will end the use of Huawei technology in its 5G network as soon as this year over security concerns.

Liu Xiaoming, China’s ambassador to the UK, said on Sunday it would be “totally wrong” for Britain now to impose sanctions on officials.

“If the UK goes that far to impose sanctions on any individuals in China, China will certainly make a resolute response to it,” he told the BBC.

“I think the UK should have its own independent foreign policy rather than dance to the tune of the Americans like what happened to Huawei.”

There were reports at the weekend that the the Chinese social media company TikTok had broken off talks to open a global headquarters in Britain.

Communist Party officials were also reported to have warned UK companies operating in China, including Jaguar Land Rover, BP and GlaxoSmithKline, that they could now face retaliation.